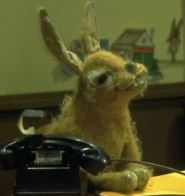 I bought a hare at the weekend. Not a real one, of course – just a garden ornament.  I particularly wanted a hare because my children’s book Beau Garnie & the Invisimin Mine features hares throughout. I hoped it might bring inspiration when writing the next book in the trilogy.

My son wanted to call the hare Septima after Beau’s hare or Bluebell after Skyle’s. He could have called it 13 after the dark coated hare who scampered home to take the Gold chalice in the Calorean hare hurdles, but none of that happened. Instead my husband took one look at it and christened it ‘Hartley’ after the hare in the TV show Pipkins. And the following day, my friend did exactly the same.

It made me wonder about the use of hares in popular culture. There aren’t that many really. Rabbits are wildly popular in literature and television, but hares much less so.   And it seems a peculiarly British choice of animal.

Perhaps one of the better known literary hares is The March Hare from Alice in Wonderland. John Tenniel’s illustration depicts the hare with straw on its head; a sign of madness in Victorian England. The poor March Hare was compelled to behave as if it were always tea time because the Mad Hatter ‘murdered time’ when he sang to the Queen of Hearts.

And who can forget the charming Nutbrown hares from ‘Guess how much I love you’. Although never stated, the hares are thought to be father and son. Little Nutbrown hare declares his love by the width of his arms or the height of his hops and Big Nutbrown hare keeps surpassing this, finishing with the wonderful line “I love you right up to the moon and back.”

Then there’s Jack hare, creation of Kit Williams in his ‘Masquerade’ fantasy puzzle book. Not only was Jack Hare the courier from the moon to the sun, but the treasure itself was a small gold & jewelled amulet hare. Worth about £5000 at the time of publication, the jewelled hare was later sold for £31,900; a great deal more expensive than my new garden hare acquisition. 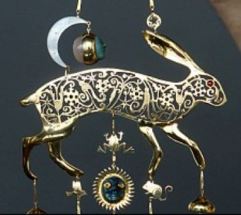 There being a few other hares to choose from, I’m not sure why my friends and relatives have so decidedly christened our hare Hartley. Perhaps it’s because we are all 1965’ers and Pipkins was part of our growing up. And my intelligent, noble ornamental hare has now taken on the personality of the shaggy eared, moth eaten old hare from the 1970’s. But the hares in Beau Garnie are recently created and not yet well established – 13 and Bluebell don’t exactly trip off the tongue. Perhaps one day in the future, someone will buy a stuffed hare toy and the first name they think of will be Septima.