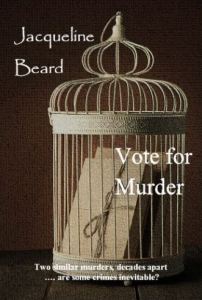 In the Spring of 1911, suffragist Louisa Russell finds an old diary in a box of artefacts, while attending a census evasion night at the Old Museum in Ipswich. The diary recounts the last days of Mary Emily Cage, executed for the murder of her husband six decades earlier.

When Louisa’s next door neighbour, Charles Drummond, dies under suspicious circumstances, the parallels between the two deaths become impossible to ignore.  But can two deaths sixty years apart be linked?  And can Louisa find the poisoner before an innocent woman is convicted?

Vote for murder is based on a real poisoning by Suffolk murderess, Mary Cage.  Set in Ipswich in 1911, the novel brings together suffragism in the early 1900’s and a grisly, Victorian murder. Vote for Murder will appeal to readers of historical fiction, genealogical mysteries and Suffolk based crime books.

Available in the Amazon Kindle store now http://tinyurl.com/pbpzehr and will follow in paperback shortly.