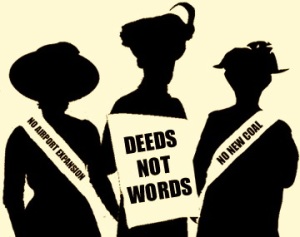 Vote for Murder combines a true Victorian murder with a 1911 story of suffragism and census evasion.  Both events were inspired by ancestors within my family tree.  But what is the difference between a suffragist & a suffragette?

Women’s suffrage was the struggle for the right to vote and stand for electoral office.  Throughout the nineteenth century, women had no place in politics but in the 1800’s, women began to campaign for the right to vote.  These women were known as suffragists.  My ancestor, Herbert Cowell, married Alice Garrett in 1863 against her fathers’ wishes.  Alice’s older sister, Elizabeth Garrett (later Garrett Anderson), became the first female doctor to qualify in England and Alice’s younger sister, Millicent Garrett, later Millicent Fawcett , was a prominent suffragist.

Many local suffrage societies were formed following the inception of the Sheffield Female Political Association in 1851 and in 1897 these individual units were bought together under the National Union of Women’s Suffrage Societies headed by Millicent Fawcett.   The NUWSS was mostly composed of middle class, educated women and they took a long-term, peaceful approach to gaining the vote.

In 1903 a suffragist, Emmeline Pankhurst, became impatient with this method and left the NUWSS to set up her own society, the Women’s Social and Political Union.  She employed more militant tactics and the Daily Mail coined the name ‘suffragettes’ as a term of derision.  Suffragettes were prepared to break the law to gain the vote, chaining themselves to railings, damaging property and disrupting public meetings.   They endured imprisonment and force feeding as a result of their activities.

When World War I started in 1914, all suffrage activity ceased.  And in 1918, women over the age of 30, who met minimum property requirements, were given the right to vote.   It was only in 1928 that women achieved full electoral equality with men when voting rights were given to every woman over the age of 21.

2 thoughts on “Suffragist or suffragette?”