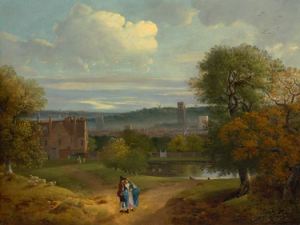 Vote for Murder is set in two main locations; Stonham Aspal during 1851 and Christchurch Park, Ipswich in Edwardian times.  Suffragette Louisa Russell, cousin of Millicent Fawcett, lives in Ivry Road on the outskirts of Christchurch Park.  These two areas, together with Henley Road and Fonnereau Road, account for many settings within the book.

Christchurch Park was the former site of an Augustinian Priory disbanded by Henry Viii during the dissolution of the monasteries.  It was acquired in 1545 by Edmund Withipoll and later in the 18th century, by Claude Fonnereau.  In 1892 Felix Cobbold gave it to the City of Ipswich.

There are various monuments set within Christchurch Park, both the Brett Fountain donated in 1863 and the Burton Drinking fountain, gifted in 1895.  The same year The Cabman’s shelter was moved from Cornhill to Christchurch Park.

Vote for Murder was set in 1911.  One scene in the book describes Louisa walking past the Martyr’s Memorial:

“…The cross-topped monument stretched skywards casting a lanky shadow over the path ahead. Recently completed, the carved round pillars caught the light of the morning sun and the carved inscription stood fresh and clear.”

The Martyr’s memorial was erected in 1903 following a campaign through The East Anglian Daily Times to provide a symbol to remember the protestant martyrs.  The Ipswich martyrs were a group of men and women put to death during Queen Mary’s reign for their refusal to recognise the Roman Catholic doctrines.  Many were burned at the stake.  There are nine martyrs named on the memorial, all of whom are mentioned in Foxe’s book of martyrs.  They were reported to have met their deaths with bravery and spirit.

A cenotaph dedicated to the men and women who fell in World War I was placed in Christchurch Park in 1924 joining the Boer War memorial erected in 1906.  Further features of the park include a fountain, an ice house and an Arts and Crafts shelter known as ‘The Bandstand’.  Prince Albert visited Christchurch Park in 1851, the same year that Mary Cage was hanged in Ipswich Gaol.

Christchurch Mansion, a red brick Tudor House, still houses the museum in which furniture, paintings, and pottery can be found.  Exhibits have a strong Suffolk theme with displays by John Constable and Thomas Gainsborough and cases of Lowestoft porcelain.

Nowadays Christchurch Park is a busy, family orientated area, ideal for indulging in outdoor pursuits, sports and the Arts.  The Park enjoys strong support from The Friends of Christchurch Park.

“Oh may Thy soldiers, faithful, true and bold,
Fight as the saints who nobly fought of old,
And win with them the victor’s crown of gold.
Alleluia.”

(Inscription on the memorial to the Ipswich Martyrs)